“Imam Al Shafii had a Muzayyin – literally a stylist!

He had a barber that would make him look good! 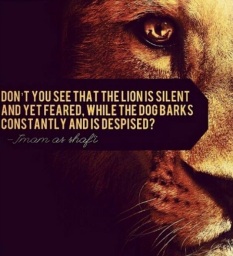 The above lines of history tells us many things out of which the main lesson being – our pious predecessors were not only men of the hereafter but took measures to make sure they appeared to be seen as the most fashionable and smart people of the world as well. What this does is it creates a trendy image of people who follow the religion in steadfastness, it breaks decades  old stereotypes of religious people being filthy, backward, scruffy vagrants (homeless), out of touch with the common folk who are busy living in the world. The above reference reinforces the truth of Prophetic sunnah being one of style and elegance not of rag-tag wearing wild hair raving and dirt ravaging wondering fakirs of the world. In modern times the idea of a pious man has grown into an image of a old man who has almost nothing on him, with wild hair, a walking besides him, teared clothes and frequent reciter of poems and Quranic verses.

This is typically how a person imagines him to be:

If you find your self in a destitute situation where your circumstance has made you appear less appealing, then that is understandable. However, this article is more for those people who go out of their way to look less presentable simply because they believe they are pious so no need to waste time in looking good for people. That is where they go wrong, you never should do anything for people anyway, only for Allah; eating, sleeping, working, even going to the bathroom when you need to for Allah. So, when you dress it should be for Allah and because looking good is sunnah!

Islam and more importantly the sunnah in this context is not here to rid you of all the elegance and halal decadence one may wish to display. The words about Imam Shafi illustrates is the importance to appear clean, smart, look sharp and be fresh in public and private. In public it acts as a dawah of the body attracting people to the beauty of the Prophetic sunnah and the message of Islam. It helps display the idea Islam is of the world and for the world it is not here to confine you to some dusty run down and abandoned mode of living in a remote place away from civilization.

In private, being fresh and looking on-point also makes you be more appreciative of the the blessings of Allah on you. You can “see” how your life is comfortable and well off. Sometimes if a person is “rich” but not spending it on himself and his family the appreciation factor is not there. Humans by design like to appreciate things more easily when they have it in front of them, something they can “see”, a tangible value. So wearing fine clothes and looking sharp in private also has this added value in making you feel and appreciate what Allah has bestowed on you. You will more likely enjoy your worship as a result and take time to reflect and learn life lessons i.e an easy way to do introspection.

Unfortunately, a common theme among practising Muslims in the 21st century is the notion of losing oneself. That is, the more a person becomes practising it appears he begins to pay less and less attention his or her external appearance incorrectly assuming “what’s the point of looking good when this body of ours is not who we are”, or, “why should I bother when I die my body won’t be with me, I am the soul, the real me”. This attitude then begins to have a drastic effect on a person’s appearance, so much so if someone else was to see this person they are put off anything to do with Islamic values and dress drawing a link to the message of sunnah and that person’s appearance. Essentially, “if this is what sunnah is or how I am going to end up if I start practising, then I’d prefer to stay the way I am“. In effect pushing people away and solidifying the idea in non practising Muslims religious people are backward rag-tag wearing simple minded people detached from modern living or sense of fashion and style. This is completely contrary to how real men of Allah are, they go the extra mile to make sure they looked the part. We find the same is mentioned about Imam Abdul Qadir Jilani & Imam Abu Hanifah may Allah be pleased with them, both of whom were multi-millionaires of their time and exceptionally pious at the same time reaching high spiritual stations of servitude seldom anyone else has ever reached. Men like them and others would wear fine halal clothes money could afford them, would keep nice, kept beards and moustache, wear pristine awesomely tied turbans, wear the finest fragrance and have the best horses (cars of their time) etc. All this not in vain but with the right intention to show the world being pious and having the halal things of the world are not oxymoron. If you cannot wear a nice turban or keep a clean groomed beard for example then take time to learn from those who can tie a turban or know how to freshen the appearance.

It goes without saying this by no means implies that a person must spend money on himself for what he cannot buy living beyond his means leading to debts and rifts arising in the family; it simply means live within your means but whatever that is there is nothing stopping you from applying prophetic principles of elegance and style in your appearance. Even if you are not the “showy”, outgoing type of person and instead more of an introvert still the prophetic principles of elegance demands a person is presentable for:

1. The prestige and high station that the Sunnah holds,

2. The prophet sallahu alihi wasallam has taught us in numerous hadiths Allah is beautiful so he likes to see beauty on his creation through the character, appearance and appreciation. (paraphrased hadith)

2 replies on “Imam #shafi was a #trend setter”

Is women allowed to?

Assalamu alaycum, women can and should confine themselves to halal situations where they can dress in elegance and according to the Sunnah. For example, she can dress well for her husband and mehram close family. Also in women’s gathering where there are only women whether that is a in a segregated wedding or Islamic function.