Adam Curtis’s documentary Hyper-normalization (which is available to watch on the BBC iPlayer) is an interesting mix of recent historical events woven together with his own narrative on global events spacing the lives of millions today and what has led to the devastating consequences in the middle east. That is the emergence of ISIS or better known as the so-called Islamic-State group operating largely in Iraq and Syria. If your looking for a documentary to watch trying to make sense of what is going on then is a good point to start at. 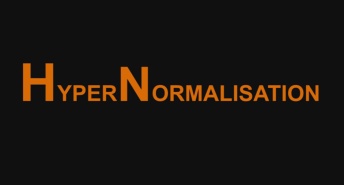 The programme documents not only the widely known and commonly held belief that the deceptive nature of US/UK foreign relations has catapulted the region into total anarchy but strives to bring home the message how our world is fake; fake in ways it captures current events and then fake in also the way this events are presented in front of our eyes. This is what people only see a fake example of what is happening around us as we cannot see anything else. We chose to see what we want, fake or real is not the important aspect here but a narrative that will fit into our precieved image of reality, giving a perfect opportunity for governments, financiers, politicians to feed into this fantasy world and leave aside dealing with real life problems reaching a level of fakeness so high its becomes normal to beleive in fake people and solutions.  People don’t want to know, see or understand, they only want entertainment and enjoyment, so  why not create a fake world? And move away from complex real world problems and into a fake world.  It is unlike any other documentary i have seen on this subject matter rather than trying to alienate viewers with the usual presentation of factual information as this is (in the mind of a viewer) boring and not entertaining, Adam does a good job in explaining how the viewer will only see what he can – things which will  only dramatize and entertain not demonstrate and enlighten.

We are taken on a journey into the build up of current major world events and what led to the position in Syria, how Donald Trump winning the US elections was a campaign built many decades ago only finishing with him becoming the next US president. We are shown how the Iranian revolution of the Ayatullah gave birth to the concept of ‘suicide bombing’ – which has now become the hallmarks of terrorist attacks in recent years. It develops the link with how the father of the current Syrian President Hafez al-Assad imported the Shia invented concept of suicide bombing into the Sunni country of Syria back in the 80s as a means to take revenge on western  powers when he was deceived by the then US foreign Secretary Henry Kissinger. Cementing links to other notable proxy wars engineered, developed and maintained by the west through the pawns of the comical show of middle-eastern politics – ‘mad dog’ colonel Gadaffi, Gamal Abdel Nasser of Egypt and others. If your looking for a documentary to watch trying to make sense of what is going on then is a good point to start at.

It does not highlight religion as being exclusively a foundation stone which gave ground for the international television drama of current events but the presents a prequel to the show of how we got to the current series. It stunningly showcases how religious zealots and in extension the unfortunate Arab population in general (who are a easily-provoked group of people), of being used as pawns in the game of subversion and unwittingly being led to creating final episode of the international political drama – secular ideals of world domination. Destroying the idea religion plays a central role in the global rise of negative energy, problems,  misery,  starvation, violence, death and all the evil on this blue marble we call our home, the earth.