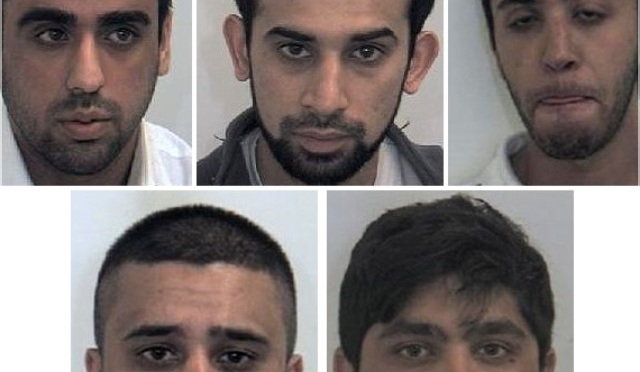 In the past few days news channels, radio shows and social media sites have all been awash with news of yet more grooming gangs largely run by Pakistani men, roaming the streets of Rotherham UK. Who frequently abused single, often neglected, under age girls between 20 – 30 men at a time! The Rotherham grooming gang scandal is just the latest unearthing of a disgustingly astonishing crime being committed by largely, Pakistani men. Men whom unsuprisingly seemed to think they are invincible and above and beyond the law. Since they have been getting away with such dastardly abominable crime for more than a decade.
This is a new ‘accolade’ added to the already-full ‘award’ shelf of criminal activities committed by that community; From fraud to drugs and sex gangs to robbery, the Pakistani community seem to be spiralling into a megastorm of destruction and disdain. Of course, not every Pakistani is evil, twisted and vile but the community as a whole is going through what is often called a ‘loss of identity’. Not knowing where, or what to do and where they are heading towards. A society largely which is made up of foreign hosts that have been courteous enough to have taken in, supported, and given refuse to the many older generations of the Pakistani community back in the 60s and 70s. It is unbecoming to eat from a host’s house and then abuse the host’s daughter and wife as well!

Facts and figures will in a short time show a sharp increase in crime being committed by the Pakistani community. A new criminal face emerging in the underworld of criminal activities. Yes, I know, younger generations born in the UK will always shout out they are of the nation. The truth of the fact is, deep down there will always be an element of society that will never see them as the real people who carry the blood of the Viking ancestors.
It is not a far stretch thing to assume the Pakistani community of UK are fast attaining the notorious mantle of the Afro-Caribbean and Afro-American communities of the US. Communities which were traditionally known to be struggling with the increase of drug fuelled violence and illicit open sexual activities. This problem seems to have no clear solution or any way out for the Pakistani community to redeem itself. From terrorism implications to large scale industrial size people trafficking, crime is fast becoming a specialised skill done well in that community. It is not so much about pointing fingers and demonising the community but more about highlighting the obvious and making accountable a community largely in denial. Faith is also another ailing factor in the community which has cast aside the teachings and luminary examples of pious predecessors. Religious practice and obedience to the laws of Allah are given as much relevance as the soap operas and Bollywood fantasies that underpin their lives. In fact, many traditionally understood acts of worships have been completely altered or altogether thrown out. Anyone wishing to address this dark and growing disease within the community is shunned and his attempts are seen as a smear campaign against the ‘blemish-free’ Pakistani community. This mentality only serves to add to the problem and fuel the twisted mindset of sick individuals within; Making them believe what they are doing is in fact not such a bad thing after all, since no one will do anything about it.
The bottom line is, as long as a community lives in denial and wishes to brush aside the rightful concerns and views of others, then nothing will ever change. Nor will it work to cure the growing cancerous disease killing the old, the young, the strong and the healthy in the community.
Rotherham is another town now added to the long list of Pakistani – asian pedophile rings operating in an untouchable fashion across many towns and cities. I won’t be surprised if this is not the last we hear of the Pakistani-Asian pedophile rings!

To end, these disposable and despicable people should know, they can run but they can’t hide, – (to use an over used cliche). Since when a game of chess ends, even the kings, queens and the rest are thrown into the same box of reckoning; The day of judgement.
Recently, these (BELOW) bunch of deprived, desperate, good for nothing, low life dimwits, sexual predators were given a minimum of 40 + years prison sentence for another child grooming operation in another town!

2 thoughts on “What is happening in Pakistani communities across UK?”