The dramatic rise of ‘hipster’ Islam is not only a new phenomenon but a niche movement largely within the convert circles of Anglo-American Muslim communities. This is now beginning to find room within the next generation of Indo-Pak British Muslim youth. The pull to all things singing, dancing and unresistant ‘enjoyment’ is always there, and to give it a green light, the go ahead that it is legal under Islāmic sharia rules, will undoubtedly pull people in doves if not hundreds. Why this problem exists within the largely convert communities is for one simple reason; Many come from a background heaped in drink, drugs, songs and dance. To leave this behind in all honesty is a step to far for many of these people. The answer is to simply ‘halalify’ an action and continue on doing it, under new guise and appearances. If you thought you have seen it all; all the groups, the infighting and the seemingly never-ending tribal mentality theological wars, then you’ve not seen nothing yet.

Many in this so-called pseudo-‘Sufi’ groups use honorary names like Rumi and Ba-uddin to translate the wisdom filled teachings of these great saints to prove their backing for the nonsense known as ‘trans-meditational healing’, or to achieve a higher state of consciousness, through the very things these wise men were adversely against; music, dance and non-conformance of shariah. 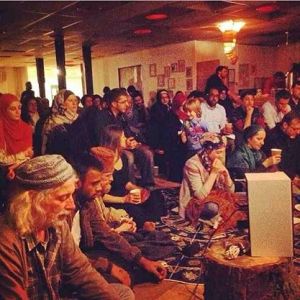 These images are from ‘hippie Muslim’ gatherings and some from an actual ‘hippie concerts’. Cant tell the difference? Me neither!

Can you even dare to imagine our great people of the past and present picking up a guitar, a flute or any other instrument, sitting in a gathering of mixed men and women, talking about love and compassion? There will be only one type of love and compassion in these gatherings! And we all know where it will head – chuckle.

If you were to say to these people, on what wild bases can you allow such ludicrous actions to occur under the banner of ‘Sufism’?
They say, it’s all about inclusiveness and love; To love thy neighbour and to spread thy compassion. There is only one type of love and compassion being shown by these people, and that is for the devil and his traps! For pathetic actions there is always its equal level of pathetic excuses. They say, what we do is for the youth, to keep them from going away and to ‘re-mosque’ – (a term also developed by these communities) to keep our youth grounded. Well, to ‘re-mosque’ in their definition appears to mean, bring in all the pomp and ceremony, the music and dance, introduce it in the mosque/Islāmic centers and that’s the way to keep our youth from the clutches of the devil. – if you are willing to the devils work why will he want to do it himself? He would simply put up his feet and say ‘keep on going lads, you’re doing great work!’.

Each era brings with it a slight variation in the age-old fitnahs of the past, this ‘hipster Islam’ is in a league of its own. The idea we can simply sing our way, using guitars and bass instruments, into paradise is absurd and at the same time insane. Rumi’s Cave, Taleef Colelctive are just a couple of examples of a number of organizations that have began to spring up all across the western Anglo-American Muslim communities.

One reply on “The rise of Hipster Islam”

Assalamu alaikum you are doing a great job with this site ma sha aallah keep up the good work brother.