Not so long ago, back in the late 90’s, around 1998/99, i remember zaytuna college, the foremost Islāmic establishment in America to preach & teach traditional Islam, looking like this:

where there used overwhelming spiritual benefits pouring out of the highly charged and inspiring Islāmic environment built within the confines of zaytuna’s classes. They used to lay special emphasis on the Islāmic mannerism’s and code of ethics. Segregation was at the top most priority. (As you can translate from the above picture).
The whole atmosphere was a good reflection of the contents being taught. Generally, the whole setting, lighting and the general ethos of people was an integral part which helped to deliver zaytuna’s promises. That being, teaching traditional Islam to its western audience. It was a place to escape from the fast paced, dog chase of the western life. With everyone being constantly busy and having no time to reflect, relax and re-connect with their lord. From the picture alone one can gather numerous understandings. The place was full of serenity, with students and teachers alike dressed in sunnah, the thowbs, beards and hats, it helped a person get into the Islāmic mind frame, to learn true love and to be truly loved by the teaching of Islam and the sunnah. The environment helped a person be taken back and transported to the times of classical Islam. To the times where Islāmic lifestyle was at its highest. It gave a taste of what it must have felt like, to learn the Islāmic sciences from people like Imam abu Hanifah, and to learn the sciences of medicine from people like Imam ghazali. One even felt you were in a truly Islāmic environment where the mannerism’s being taught were implemented and clearly viable on the students and teachers alike. The environment was a spiritual backbone which catapulted the success of the early zaytuna days.

It further helped a person escape into an surreal Islāmic world where the whole environment was different to the norm of the day.
Unfortunately, as with everything in life, the highly inspiring Islāmic environment which was once so prevalent in zaytuna college’s classes seems to be deteriorating very rapidly! and i lay the emphasis on the word ‘rapidly’.
This is what it has become now: 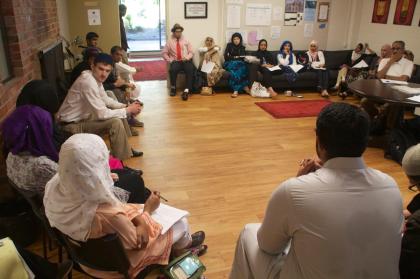 The presence of a physical barrier has been completely removed and thrown right back into the garden shed! 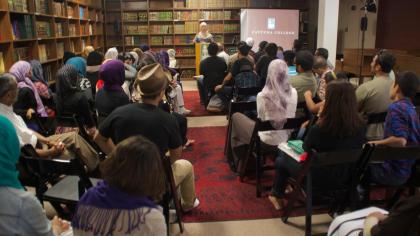 The post 9/11 era has really battered the idea of ‘traditional and classical’ Islam being taught in the western world. I remember zaytuna being at the forefront in teaching traditional Islam which our greatest generation of the past, used to practice and teach.
Now the idea of traditional Islam has been replaced with an idea of ‘liberal Islam’, an Islam which shows to its non-Muslim onlookers ‘look we too can do things like you. We do not need to have classes which segregate the men and women. Or, have to avoid dressing in ‘normal’ western attire of skin-tight jeans and shirts. We too have classes where the men and women sit side by side and interact with each other, often times sharing jokes and having a good college life’.

As sad as it is, zaytuna college looks more like a typical western college/university. It simply has a Muslim name or a tagline to it. Other than that, there is hardly anything Islāmic about it. Its classes, the students, the teachers in many aspects, and the whole approach at zaytuna now, is western. In every sense of the word!
Don’t give me excuses why they have become like this. ‘Its out of their control, they have no choice but to be like this. It’s no longer a ‘Islāmic’, school but a ‘liberal arts college’. Even if that’s the case, and they have changed their outlook from classical Islam, to modern, toned-down version of Islam. It is still in the control of the board of directors (one of them being Shaykh Hamza Yusuf, the founder and patron of zaytuna college) to enforce the lost Islāmic environment they had, in the classes. As the whole campus of zaytuna college belongs to the muslim community. So, they have the right to present and teach in classes the way they see fit. Whatever happened to the freedom of religion and the freedom of rights America champions itself with everywhere?

Lastly, with the media downplaying the madrasah systems in the Muslim world to being ‘terrorists training camps’ and ‘places where extreme teachings are taught’. These leading western Islāmic institutions, like zaytuna, are quickly distancing themselves from appearing to ‘look’ like these much hated ‘madrasahs’ of the Islāmic world. Where there are only boys or men in one room and there is no sight of a woman amongst them.

Zaytuna college distancing themselves into this; a ‘new’ and modern, ‘liberal arts’ Muslim school. Where there are both Muslim men and women learning side by side:

The greatest fear of humans has always been the fear of the unknown. This is what is eating up these leading Islamic institutions in the west. Fear that they ‘might’, just ‘might’, get called a ‘madrasah’, the feared ‘training camps for extremists’ in the western world.