Three things needed for a person to be successful: 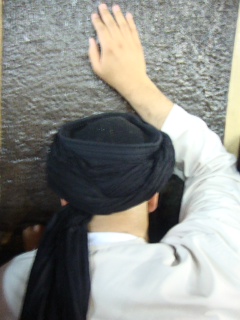 1) ikhlas – sincerity, to be doing acts of good only for Allah not for anything or anyone else. Without this even iman is not accepted. No iman or Amal is accepted!

2) faith on the unseen (iman). This is to believe in whatever the prophet (saw) brought for us. If prophet (saw) said anything, we have to believe it without question. Even the kufr would believe that such a thing will indeed happen.
For example, when he mentioned to one of the kufar: by Allah I will kill you! – this was in response to the constant threat that individual gave to the prophet (saw). The story is, one day the man said to the prophet (saw) I am raising a good horse, feeding it well and looking after it, with this horse I will kill you! This is why the prophet (saw) (in response) said by Allah I will kill you!
So, on the day of badr the kufar came to do what he said. What happened was Instead of the man fulfilling his oath – (astagfirullah). The prophet (saw) struck him with a spear. The strike was not detrimental, but the kufar new that he will die from that simple damage which was caused. When he was asked by others in the battle, “why are you screaming since the damage caused by Muhammad (saw) was not that much”. The kufar who was struck, said “no by Allah Muhammad (saw) has indeed killed me!” he did die in the battle soon after. – just look how much the kufar even had conviction on his words (saw). In fact, the kufar gave the title of ‘as-sadique’ the truthful one, to the prophet (saw).
It seems that today many Muslims do not have the convictions which the kufar at that time had.
It was their jealousy which made them not accept islam. Although, they new it was the truth. Many of us do sins, thinking i will get such and such a thing, status, pleasure, benefit etc.
However, Allah says, to him belongs the power and honour. Yazeed outwardly had the honour of that time. But, which person respects him or values him? He had many slave girls, Four wives, the fake ulema used to praise him in their kuthbahs etc. Despite this, he is loathed by Muslims!
So, when we say about iman, it means that we should believe in the prophet (saw) blindly. This means that I or you do not believe the prophet (saw) because of what we think.

3) the third is amal / deeds. – to do deeds of the righteous.
Iman is the act (Amal) of the mind & heart. Whilst the Amal is the act of the body. – this is what all the turuqs (the path of purification) teach.

Teachings from Imam sharani:
– he says that, if a person is a slave and is bought. The slave does not deserve any wages since he is a slave. If the slave then starts asking for payment for the work he is doing that will be considered disrespectful. In the same light, we are slaves of Allah, but in fact created by Allah. All the good we do is given by Allah. The body, time, space, energy etc. – this is why the awliyah never considered themselves as being anything or of expecting any reward. This is why we should not think we deserve some reward for the good we are doing.
*the true servent does the act because the master has told the slave. A command to be carried out. Then it is out of the mercy of the master he rewards us* – this is why when a person does good. He should not think I have done a great thing. Rather, think that I have fulfilled a order. He should instead think I am not deserving of any reward. This is why we find Allah loves the awliyah. Since, they do the act of good, because Allah has ordered them. If you want to become a friend of Allah, then do the acts of the awliyah.
– the servant should think, if he receives any reward it is purely out of the generosity of the master.
– the reward for doing good is automatically attached to the Amal. So, there should be no need for asking any reward. Since by default the reward will be given. – This is the manners of servitude. To rid oneself of “want”. The desire to receive reward for doing good.

The manners of learning knowledge:
(this also refers to the ulema)

– the student or the scholar should most importantly, rid himself of arrogance.
Secondly, there will be no benefit to the student or a scholar of his knowledge if the student does not spend time in the company of the awliyah. They will teach you how to implement the knowledge. As, they (the awliyah) do not have any egoistic desires. The more knowledge one has, the more power the nafs gets. The more arrogant a person is likely to become. The reason why the devil was cursed out was because he used knowledge as a defence to his case! That he is made from fire, and fire is better than mud (dust). He was a man of knowledge & actions but not a person of tazkiyah. The awliyah purify ones knowledge. Freeing it from the filth of arrogance and pride etc.

Shehudin Abdus Salam, A great scholar did his tazkiyah on the hands of imam shajizili. He said, the proof of the awliyah are the miracles which emanate from them. I have not seen any miracles being done by any normal scholar who has no links with a friend of Allah. Yet, a normal unlettered friend of Allah can do miracles.

– The manners for a person who is travelling in a path of perfection.