During Asr today at our local mosque, just before the takbeer ulla (the first takbeer for the commencement of salah) was made. We had an influx of sufis enter the masjid and join the jamat. Instantly those present at the masjid could see they were part of a tariqa, due the uniform they were wearing. whom seem to be passing by and came to join the jamat. The strange thing was though, their entrance, and their uniform gave them an immediate image of distinction. Anyone present could understand they were a group, who were, in turn (most likely) part of a larger group. 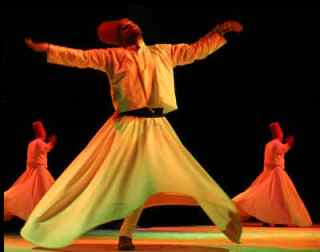 My point of this is, most if not all the sufi groups which are prevalent across the world have a distinctive uniform. Any new comer who joins the group is either given the uniform and requested to wear the garments. Or Secondly, many who do not advocate such actions, indirectly allude to the new comer to dress accordingly, or the shaykh himself will hint towards the superiority of the group’s dress code compared to others. The most common dress code of a sufi to the western muslim or non muslim the the image of the whirling dervishes! The thought of a ‘sufi’ conjures up an image of the whirling dervish who is dressed in a certain way, in the minds of the ‘non-sufi’ population. These are pseudo-sufis, a the real sufi should be the one who is only the reflection of the sunnah and nothing else!
The real shaykh will always alternate between the way he dresses. The prophet (saw) would wear a hat aswell as wear a turban. He (saw) did not only stick to wearing a hat or a turban. Anyone who ALWAYS wears the hat, or the turban, has moved away from the closeness of the sunnah. Although he will be rewarded for wearing the hat or the turban, but it will not be the total closeness to the sunnah! It is recorded in the scriptures that he(saw) would wear the turban. Not only that, but he would change the colour of his turban periodically and not stick to one particular colour. There are four colours which he (saw) would wear predominately, they were: white, black, brownish, and dark green coloured turban. He (saw) would not stick to only one colour of the turban. As many people tend to do. Many say, that he (saw) loved white, that’s why they wear the white turban, always. Nevertheless, He (saw) did not wear this all the time, although that was his favourite colour!
In the indian-subcontinent this is very clear, one such group whom are very popular and a very well known throughout the world are the Dawati Islami brothers. The brothers doing excellent work of Islam. Unfortunately, they are very distinctive in their dress code. The bright green turban and the white selwar khamis. Although to wear the turban is a great act of virtue, nonetheless they have coined it to their own school uniform. Rather than wearing the uniform of sunnah, since we are only from the school of the beloved messenger (saw) and no one else.
the real sufi is he who should become the complete reflection and shadow of the sunnah. When anyone sees him they are reminded of the messenger of Allah. On the other hand, the Sufis of today, rather than this, they remind a person of that particular group which he/she belongs to. The founding father of the group instead of reminding the people of the messenger of Allah! This defeats of the objective, since the objective of following the sunnah WAS to embody the prophetic ways and not the ways of one particular shaykh!

I can understand the need to obey and be humble towards one shaykh. However, if the shaykh is a true shaykh then he will be a total reflection of the sunnah of the prophet (saw) and will not appear to be setting his own trends. Many shaykhs of tariqa’s wear only one type of hat or one coloured turban. Which as a result, the murids also wear the same hat or turban, all the time.
I remember a few years back someone asked this question to my shaykh. Which was;
when joining a new tariqa often times it is noted that the tariqa has a certain uniform. Which if the new comer does not fit in with the dress code he feels left out. Secondly the others in the group treat him like a outsider, always giving him pressure. IF a shaykh wears a certain type of hat, then all the murids only stick to wearing that particular type of hat or turban. Are we to follow the sunnah of the shaykh or of the prophet (saw)?