SubhanAllah… with every new age comes a new kind of fitna i guess. The more closer we get to the day of judgment it seems that the fitnas amongst the ummah and from the outside are getting stronger and more twisted as time progresses on to the final ultimatum. just before dhur today i had a discussion with a brother in which we came to the point of highlighting that the amamah (turban) of the messenger of Allah is an established sunnah and how he (sallahu’alihi’wa’salam) used to wear it 90 – 98% of the time with the rest being normal topi (hat). i was amazed with the reaction which i received from the brother after this point in our discussion. Now before i go on to say what he said i would also like to highlight that he is not of the salalfiyah, whom on every instance of life need a daleel (evidence) of everything. This particular brother is more inclined towards the deobandi school of thought, as his fiqh teacher is from that school of thought. This school of thought is prevalent in the Indian subcontinent. – for those who don’t know. What he said was that the prophet (sallahu’aalihi’wa’salam) did not wear the turban 90 -98% of the time and that he (sallahu’alihi’wa’salam) never wore a hat in his life. This is just a myth cooked up by the people! alarming as it sounds, the issue with the hat is that it is widely accepted and known that he (sallahu’alihi’wa’salam) wore a hat now and then, i find it strange how he or his teacher came to the conclusion. When i asked the brother to ask his shaykh he told me that he did and his FIQH teacher told him he has over 100 hadiths against the wearing of the hat. That the prophet (sallahu’alihi’wa’salam) never wore a hat etc. SHOCKING! i know.. 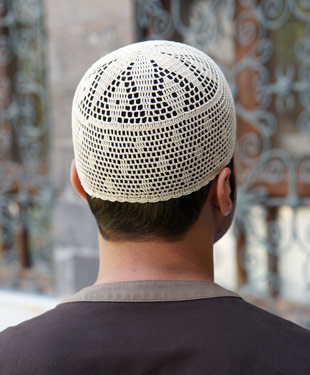 what is the ummah going though?… subhanAllah, instead of approving and following the sunnah blindly and unconditionally. Nowadays they (people) are trying to disregard/discredit and put down the sunnah. With as many sunnahs as possible people are trying their best to find ways in which they can escape from following the sunnah. they will spend time and effort in researching and finding out the ‘real’ answers but, will not practice the sunnah! when one asks them why they do not act on the sunnah. Instead of having a sense of remorse and an acceptance of guilt they will moreover go on the offensive. Attacking you for simply giving a sincere advice. disapproving you of what you say. “This is not sunnah and that is not sunnah, where is the proof” etc.
I see the new age type of deobandis that are emerging are being indoctrinated with an idea alien to their original founders who were as some will agree close to the sunnah.

2 thoughts on “The denial of a Sunnah”